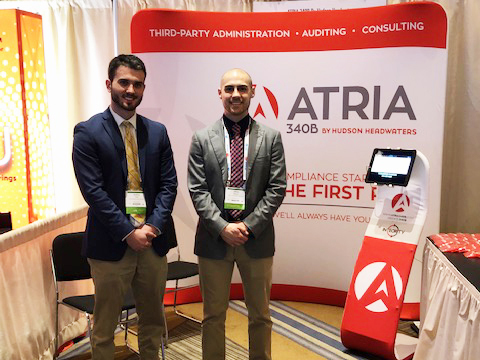 The 15th Annual 340B Coalition Winter Conference was held in San Diego, CA from January 30th – February 1st. With over 1,750 340B stakeholders in attendance, this was the largest attended conference to date.

The ATRIA 340B by Hudson Headwaters team attended the conference to learn more on all policy, regulatory and legal developments unfolding in the 340B arena.  ATRIA 340B team members Jim, Andrew and James attended multiple information sessions and stakeholder specific breakout workshops in addition to speaking with program participants at the ATRIA 340B booth.

340B drug pricing was among the hot topics discussed at conference.  The current administration continues to focus on drug prices, as there is some legislative concern that 340B could be to blame for the ever-rising cost charged by manufacturers.  It was reiterated throughout the conference that 340B stakeholders must continue to respond to program scrutiny with facts, and 340B impact stories to exemplify how the program is working.

2018 proved to be a very busy year for 340B in Congress. There were four hearings regarding 340B on Capitol Hill, three of which were in the Senate, which had never occurred previously.  Overall, there were 23 legislative changes proposed in 2018, with many being potentially problematic. However, ultimately no new legislation has been passed to date.

There continues to be favorable outlook on 340B by policy makers in Congress. In 2018, Congresswoman Doris Matsui (D-CA) introduced the Stretching Entity Resources for Vulnerable (SERV) Communities Act, legislation that clarifies the intent of the 340B Program, enhances program integrity, and protects and expands the program to meet the needs of the opioid crisis.

Matsui argued, “Hospitals and clinics doing life-saving work rely on the 340B Program to help them provide inclusive and affordable care in their communities.” Matsui has been praised by hospitals and health centers alike across the nation for her ongoing support of 340B, which has proven valuable when the program comes under attack from opposing legislatures. The SERV act helps to shed much-needed light and provides transparency to 340B, providing clarity to congressional leaders.

In discussion about drug pricing, HHS Secretary, Alex Azar, has shared his long to-do list to combat rising drug costs, focusing on the global pricing model compared to the current free market pricing in the United Sates.  One of Azar’s goals is to eventually revive CAP (Competitive Acquisition Program) that would impact how providers purchase drugs by allowing international competition.  This ultimately would put more pressure on American manufacturers to lower their prices, having an indirect impact on 340B as a result.  While this program ultimately fits the current Trump campaign, there are still many hurdles to clear before it would come to fruition.

It is clear that the 340B community can continue to see significant congressional activity related to the 340B program in 2019. HRSA will continue to prioritize auditing as a means to oversee the program and will focus on targeted audits and re-auditing entities with previous findings to ensure that their Corrective Action Plans (CAP) is being adhered to. HRSA expects a six month implementation of a CAP, including repayment to manufacturers. There is also talk of HRSA potentially removing a covered entity from the 340B program for any repeat findings in more than two audits.

As a third party administrator, consultant, and participating covered entity, ATRIA 340B seeks to collaboratively protect the integrity of the program through preparation for program reform. Are you ready for potential program changes?  Reach out to learn more about our services and how ATRIA 340B can help you meet your goals. Give us a call (855-835-340B) or send an email (ATRIA340B@hhhn.org). We’re in this together, so let’s do it right.